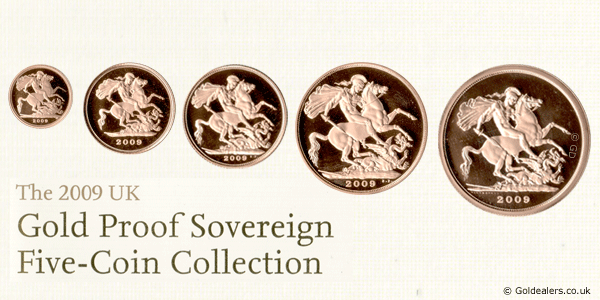 For the original gold sovereign coin, minted in 1817, St George is shown holding a shattered lance in his right hand, with the other broken piece laying on the ground below. Benedetto Pistrucci, the engraver who designed the sovereign, later in 1818 changed the design by replacing the broken lance with a short sword.

In the hands of many engravers over the course of the long history of the Gold Sovereign, this classic depiction has been modified in many ways.

The Sovereigns of 2009 in the featured image were engraved by the Royal Mint. The beauty of these particular coins is that the coinage dies used were manufactured directly from Pistrucci’s originals – the first time that the originals have been used in this way during the production process. The £5 piece, Double Sovereign, and Sovereign were manufactured using these original dies.

For the half sovereign, tools of 1893 were used because it was not until then did images of St George and the Dragon appear on the coin’s reverse.

The reverse of the £5 piece reflects the original pattern of 1820 which, modelled on the 1818 crown, carried the artists name in full.

The double sovereign is also based on coins of 1820, but only has Pistrucci’s initials engraved.

The full sovereign also has Pistrucci’s initials engraved, but features a plumed helmet, minus it’s streamer.

The half sovereign contains no initials at all and this is the first time the set includes a quarter sovereign.