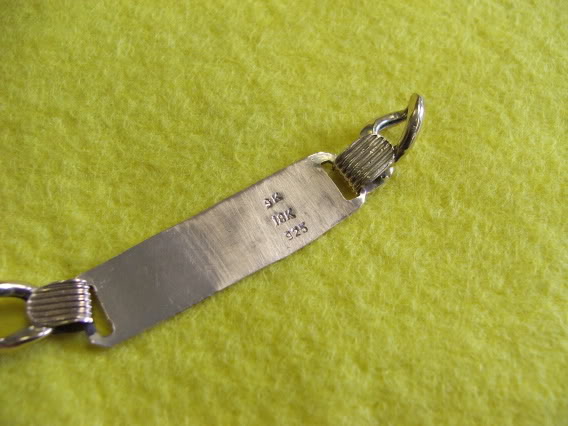 The Birmingham Assay Office welcomed the BBC’s Watchdog Television Crew and a trading standards officer to test items of counterfeit (fake) jewellery that had been seized without hallmarks.

The goods were brought to the Birmingham assay office to be tested. Of a total of 90 items, only four were found to have hallmarks, and 14 items were stamped 22ct gold but were found to be significantly below standard.

The reason we are bringing this to your attention, is because every day, we receive items without official hallmarks.

An example being just yesterday when a customer came to visit us with what he claimed was a 22ct bracelet. Forgetting the fact that the bracelet had a 333 stamp on it (8ct), the customer had advised us that he had received an insurance valuation on the bracelet stating that it was 22ct.

We tested the bracelet using the latest in X-Ray Flourescence technology to confirm that the bracelet was in fact 8ct.

The customer never did show us that insurance valuation, or sell us the bracelet. Who knows what was going through his mind but we shall give him the benefit of the doubt!

In this case, the outcome was clear and simple, maybe the customer was genuinely confused, but there are other times as per counterfeit jewellery where dishonest dealers stamp the jewellery with fake hallmarks to trick you into thinking that they are something that they are not.

A member of the general public, may be forgiven for thinking that if an item has a 9ct or 14ct or 18ct stamp on it, then the item is in fact that particular carat purity.

Unfortunately, the truth is that anybody can purchase a stamp saying 22ct on ebay for about a tenner including postage.

If you purchased this 22ct stamp, and punched it on a 9ct ring, does this make the ring 22ct?

Goldealers purchase both hallmarked and non-hallmarked jewellery. Using the latest in x-ray technology, we are able to determine the purity your jewellery to precise accuracies.

In the case that you think an item is 18ct, and we find it to be less, we will always alert you, and give you the choice as to whether you wish to continue with the sale or wish or us to return your items to you.

It is however worth noting, that your Fake Tiffany Jewellery rarely will have an official British Hallmark, and rarely meets the standards required for Sterling Silver.